Frýdek Palace, originally a castle, is the oldest existing historic monument in Frýdek. Between 1327 and 1339 Kazimír I of the Piast dynasty as the Duke of Těšín had an aristocratic Gothic castle built on a steep slope overlooking the Ostravice River for the purpose of protecting the border lands between Moravia and Silesia. In 1434 the nobility of Těšín were forced to give up the castle as a form of payment security for debts incurred during the Husite Wars. The ownership of this castle changed hands several times.

Jan of Pernštejn, who obtained ownership rights of the Frýdek Manor in 1545, was one of the most renowned of these title holders and also one of the most important individual Czech and Moravian noblemen. Jan of Pernštejn began the Renaissance reconstruction of the castle. The reconstruction was essential mainly for representative purposes; the Pernštejn did not settle in Frýdek but Frýdek served as a representative residence during their trips and frequent visits.

The brothers Matyáš and Jiří of Lohov who purchased the Frýdek manor in 1573 were also very well-known owners. Although both brothers are listed as owners, Jiří of Lohov is registered as the rightful owner throughout the period. At the same time Jiří was the head of the Vratislav Bishop´s council and did not reside at the Frýdek manor. He considered whether to sell the manor after the death of his first wife. Due to this reason he had a list of lands in the Frýdek manor drawn up. In 1581 Jiří of Lohov sold his manor to the Bishop of Olomouc, Stanislav Pavlovský. He in turn did not hold on to the manor very long and in 1584 sold it to Bartoloměj Bruntál from Vrbno. This Moravian dynasty held on to the ownership of Frýdek Castle until 1636.

Bartoloměj Bruntálský of Vrbno, the supreme regional magistrate of the Olomouc principality, maintained the Frýdek manor during the years 1584-1604, and from 1606 until his violent death in 1620 it was managed by his nephew Jan Bruntálský. Jan´s widow, Alžběta Sedlnická of Choltic administered the manor following his death until 1636. The Bruntálský family of Vrbno completed the reconstruction of the Gothic castle to a  Renaissance style. They made the castle their direct seat of residence and therefore had primary interest in its modernization. Nevertheless, not even Frýdek was spared from the military events of the Thirty-Years War.

In 1626 the military forces of the anti-Hapsburg Coalition approached the outskirts of Frýdek and demanded entrance into the city. The inhabitants rejected this demand, subsequent battles ensued during which casualties occurred and Frýdek was plundered. Neither the castle nor the noble court were spared from the looting and plundering. The Bruntálský family of Vrbno neverthless attempted to uplift the economic situation of the manor (establishing new villages, Vallachian settlements in the mountainous regions of the domain), but the military events and an epidemic contributed to the stagnation of the manor. The rise of financial costs and debts forced the Bruntálský family of Vrbno to eventually sell the manor. In 1636 it was purchased from them by Count Jiří III of Oppersdorf, a member of the original ruling dynasty descending from a Niska principality in Lower Silesia. 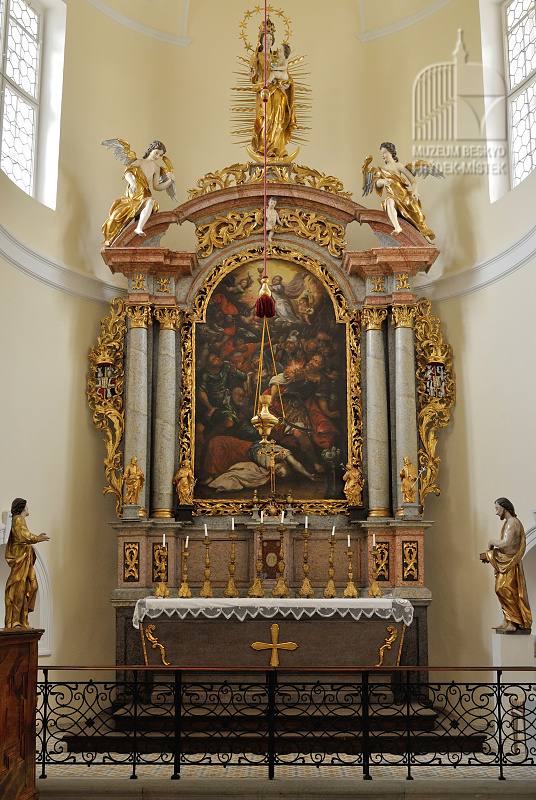 After taking over the manor the Count confirmed the rights, privileges and traditions of the town, and had the lands registered. The Count was very contemporary during this period not afraid of conducting business affairs, established a new iron-mill on his manor (this is also connected with the founding of a new village – today´s Staré Hamry), and had a brick factory built on his manor in Frýdek. His activities however did not find favour among the inhabitants of Frýdek; an open conflict broke out in 1641 which in the end had to be resilved by the emperor himself.

Jiří´s measures with regard to the brewing of beer, measuring malt, tax revenues and the protection of orphans and widows was also very problamatical. He also began a further phase of reconstruction in Frýdek Castle to conform to the needs of the new period. The building of the Chapel of Saint Barbora belong to one of his most important Early Baroque construction projects in Frýdek Castle.

Construction alterations in front of the castle began with new H shaped buildings which created the foundation of today´s extensive front castle. The castle also received a whole assortment of new rooms, parlors, reception rooms, an apartment for the county representative, rooms with offices in the east wing, etc.

The count reassured his subjects within the villages of the Frýdek manor of their landholding privilages and the town inhabitants of their rights to establish craftsman guilds. Among other things he continued with the construction activities of his father. The extensive fire of the town and castle which broke out on April 12, 1688 in Frýdek and „turned it into ashes“ had a considerable influence on this. František Eusebius was not idle and after the destructive fire immediately began to repair and alter the castle at the height of the Baroque style. He had the current main tower constructed. The Knights Hall was extended by raising the ceiling by one meter.

It was rebuilt according to Baroque symmetrical design and a limestone fireplace ornamented with the coats of arms of František Eusebia and that of his wife Anna Zuzana Beesová was furnished; the fireplace is dated 1692 due to its being completed after the death of the Count. This is the most spacious hall area within the castle. A castle wing connected to the main gate was also completed. The interior of the chapel was also renewed and sanctified in 1719. He acquired the new main altar for the chapel with the painting of St. Barbora by an unknown painter. This Baroque altar is a unique work of artistic woodcarving and the sides are ornamented with the coats of arms of František Eusebia and his second wife Anna Zuzana Beesová.

The two side altars were probably also furnished during the same period, one of which was sanctified to St. Florián and the other to the Holy Family. In 1687 the remains of St. Severina Aronská, virgin and martyr, were acquired just before the fire. Count František Eusebius bequeathed Frýdek manor to his wife Anna Zuzana who outlived him by eight years; after her death in 1699 her daughter, Marie Ludvika of Oppersdorf who was married to Count Karel Štěpán Pražma of Bílkov, became the lawful heiress. In 1708 her son František Vilém Pražma (1677 – 1731) took charge of the manor. He was a great admirer of art, mainly sculptures (for example, the sculptor Matyáš Weissman – the sculpture of Jan Nepomuck in the square in front of the castle). After his death in 1731 his widow, Karolina Františka Teresie, née Almesloe (1706 – 1770) administered the manor.

In 1746 her son Jan Nepomuk Count of Pražma ( born in 1726) took over the manor until 1797. This period is considered an era of cultural and social expansion within the manor and the period during which the Mariánsky Pilgrimage Church was constructed. The Pražmo family were responsible for numerous modifications in the castle; during the administration of Countess Karolina Františka the new main staircase onto the first floor was built (the date of 1733 above the portal in the passageway is a reminder of this event); at the front of the castle the spanning areas of a number of ceilings were made and an arched hallway was built-in. Count František Vilém followed up with the work of his mother and continued with modifications within the castle. He is accredited with the renewal of the sanctuary steeple above the castle chapel and furnishing it with a bell which is sanctified to St. Barbora, the patroness of the chapel, and St. Francis Xavior, its patron.

In 1797 Jan Nepomuk the Count of Pražmo sold Frýdek manor to the daughter of Marie Teresie, Marie Kristýna of Habsburg, the Archdutchess of Austria and the Dutchess of Těšín, and to her husband, the German prince Albert of Saxony-Těšín and the Duke of Těšín. The marriage was childless and threfore they adopted their orphaned nephew, Karl Ludvik, the son of Emperor Leopold II and brother of Marie Kristýna. However, in 1822 Karel Ludvík, the Austrian Archduke and Prince of Těšín, inherited his uncle´s domain, including Frýdek manor. After the death of Karel Ludvik his oldest son, Albrecht Fridrich of Austrio-Těšín, the Archduke of Austria and Prince of Těšín, obtained the manor.

The Austrian Archduke, Fridrich of Austrio-Těšín became the final owner of Frýdek manor and at the same time the last owner of the Těšín principality in 1895. He, although never a permanent resident of Frýdek, has always been associated in the subconscious minds of local people with Markýz Géro, an enemy and oppressor of local people in the Silesian songs by Petr Bezruč. During the period when Frýdek was owner by the Habsburgs, the castle ceased to be a place of residence and seat of the owner but only became an administrative site for the domain. Constant attention was devoted to the castle because it served as a representative site and had to be prepared for eventual individuals of nobility. Modern age reconstruction at the turn of the 19th and 20th centuries, on which the last two owners had their greatest share, has had the greatest influence on the present appearance on the castle Lowering the height of the roofs in the North, West and South wings of the castle and a modification of the bay windows and tower at the front of the castle have taken place during construction modifications. The castle has been modernized technologically with the installation of electricity and the providing of drainage toilets. The furnishing of interiors has also not been forgotten.
​​
With the founding of the Czechoslovak Republic in 1918 Frýdek castle was nationalized and for a period of time under compulsory administration. In 1923 the main offices of the state forests and lands were relocated here and even apartments, social facilities and offices existed in certain parts of the castle.

In 1924 the Museum of Agriculture was opened in the Knights Hall of Frýdek castle. The Museum lead by Joža Vochala (domestic writer and head of the „Sedlištané“ association) determined „the Silesian History of Těšín“ as their primary topic, organized group discussions, exhibitions and lectures about the history of individual townships. In association with Vlastivěda publishers in Těšín the Agricultural Museum edited numerous publications about national history and geography, the collections of which have been relocated to Opava.

In 1960 the Museum was again moved to Frýdek castle as an organizational facility of National Town Council in Frýdek-Místek, exhibitions were held in the Knights Hall and an exhibition entitled „from prehistoric times to the present“ was set up in the remaining halls beginning in 1963. The purpose of the museum is to provide knowldge and information pertaining to the biology and history of the Frýdek-Místek district, its natural environment and forest regions in the Beskyd region, the residential period of Petr Bezruč and paint gallery facilities. Additional specific activities of the museum include mutual co-operation with schools and other educational institutions.

During the 90´s under the current name of the Beskyd Museum of Frýdek-Místek the activities of the museum were systematically extended; it co-operated with a wide-range of townships in establishing showrooms or halls to facilitate the exhibition of museum objects of interest; was associated with educational institutions for the purpose of providing lessons pertaining to museum topics; established the Beskyd Museum and National Historical and Geographic Society, and since 1992 has successfully launched high school instructional programs for the purpose of providing education to senior citizens.